This was my solo marathon driving day. In some ways the first three days were training- different mileage, with the help of a friend, and with cool destinations as carrots. But this day was looonngggggg. 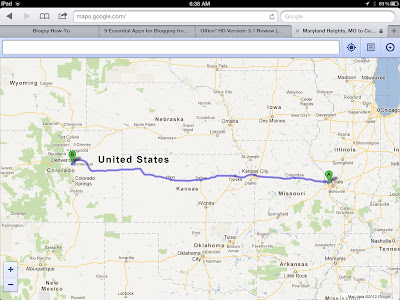 Miles driven: ~850 miles! Wow, never thought I could do that on my own! I guess that's what they say about marathons. When you train, you never do the full amount, but on the day of, you push to that 26, or in this case 850, miles!Highlights: I really was dreading this long ride in some ways, gearing myself up for it over the last week or two because I knew that I would have this long drive. But it ended up being pretty painless. I just rested when I needed to and drove when I felt I could. I took several breaks along the way, and I just enjoyed the scenery. The scenery really was pretty beautiful, especially a lot of amazing cloud formations. I was running in front of a storm and so there were huge cumulus clouds all around me. Food eaten: nothing special. Hash brown with iced latte at McDonald's, snacks in the car, half of a foot long sub at Subway, and finally some Korean instant noodles with kimchee when I arrived at my uncle's house in Centennial, CO. 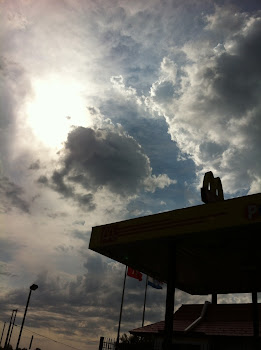 Some of those clouds I was talking about – above the McDonald's in Missouri where I overhead some older white folks talking politics. I was a little afraid that I stuck out– a young, Asian woman… It would have been interesting if I started talking to them! 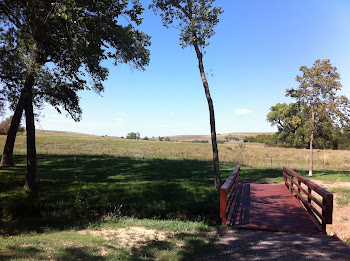 This a nice view from a rest stop in Kansas, maybe, off the side of the highway. 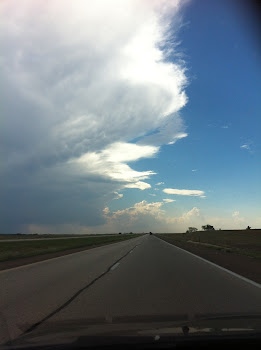 As I was driving, I passed two categories of things that made me reflect: fields and fields of corn and what I think were soybean plants AND billboards with some sort of religious content. Oh, and one more thing in Kansas were oil drilling platforms scattered in the midst of the crop fields.

I read Michael Pollan's Omnivore's Dilemma a few years ago and started to get really interested in food systems, and just seeing the vast fields of what I'm assuming were mono-crops for the purpose of money and not of food, I was struck by the reality that everything is so interconnected and that to change the current industrial food complex, it would take huge overhauls– government provides subsidies to farmers which encourages (or even forces them) to move to cash crops like corn and soybeans; many of our systems (food, energy) depend on these cash crops; farmers and town economies depend on these cash crops; and yet the whole system really doesn't produce healthy food for the people both right around those farms as well as the rest of the country. What would it take to change this system that has been handcuffing us for the last only 30-40 years? I saw that many of the fields were bone dry because of this drought and it stresses again the interconnectedness of this whole system, one that isn't meant to be nimble or responsive to environmental or other external factors.


And then on the issue of the religious billboards. I knew I was in a red state just by driving on the highway, red in a way that I was definitely not used to. It made me think about how I would have conversations with folks in these states. Would we be able to have a conversation about politics and religion, which have become so intertwined in the last several years in a way that worries me a little? Would we be able to find common ground despite some major differences in our views on the role of religion in politics, the role of religion in individual's lives?


Since I became increasingly politicized in my mid 20s, I notice I have moved not only farther to the left but also, I get more frustrated when hearing pundits on the right talk their talk. It sets up a wall where I can no longer listen to them speak and shut down any potential for discourse and dialogue. Is this what our country is coming to? Walls between people who have differing views? Where are our models of civility and reaching across differences? And am I a hypocrite who talks about racial inclusion and diversity but can't apply the same lens and approach to political differences?
Well, food for thought anyway.

We had a smooth ride for day one. No traffic, no crazy weather, good company and good music.

Itinerary: Boston (Medford and Cambridge) to Niagara Falls, Ontario, by way of Buffalo
Miles driven: ~470
Number of gas fill-ups: 2. One near Little Falls, NY, and one in Buffalo, NY
Food eaten: Whopper, Jr and fries; buffalo wings from Anchorbar in Buffalo (the originator, supposedly, of the buffalo wing); grapes from the Shaw’s in Porter Square; cookies baked by a friend; and Blizzards from the DQ in Niagara Falls.

Driving cross country, you realize how big the U.S. is. At the same time, I was amazed at how quickly we were able to get to a totally new part of the country, just with a car and some gas.

We got to Canada by early evening and saw the Falls at night. They are beautiful and impressive, but it was hard to not get a little turned off by all the tourist traps all around– neon lights, casino towers, hotels, souvenir shops, big restaurants. It almost felt like a mini Times Square. It reminds me that we are in a culture that values and requires, almost, people to make money off of ANYTHING, like the splendor of nature. Is it possible for something like Niagara Falls to remain pristine and pure but still have people come to admire it? Does human contact necessarily result in the creation of tourist “profanity”?

The world is both small and big at the same time.

Small in that we can travel to any part of it on a plane in, at most, two days.

Small in that we can talk to anyone anywhere anytime.

Small in that we can run into people we know in any part of the world coincidentally.

Big in that there’s so much to see that it’s really hard to see it all in one lifetime.

Big in that driving across the U.S. still takes a lot of time, in actual hours.

Big in that the sun takes awhile to cross the skies of all parts of the world.

I’m going to be seeing just a bit of that vastness in my travels.

And that’s as far as I’ve got planned right now.  I’m hoping to throw in a few more countries like Malaysia, Vietnam, Thailand, Cambodia, and Korea at the end.  I’m leaving soon.  September 3rd to be exact.  Excited and nervous.  Trying to finish my packing.  Last night could only sleep 4 hours.  The days are passing [too] quickly.