It's been awhile since I last blogged (a month!), and it's been a whirlwind month. I have:

It's been a busy and productive month. And now my time in Boston is coming to a close after 14 years. I came to Boston to go to graduate school; and over the last 14 years, I have (note: as I have shared before, I love lists, and it seems apropos in this entry where I'm reflecting a bit on this past time period, so bear with me!)

The last time I left a place where I really felt connected and sad to leave was in college, 17 years ago. But then it wasn't really a choice. We had graduated, and it was time to leave. Now, I make this choice to leave voluntarily, not because of anything bad that is pushing me out. In fact, I have much to keep me here– namely, the people I know and love here.

Not really sure what kind of tree this is, but look at those buds and flowers on the branches!

I've made the decision to leave Boston because I'm ready for a new challenge, to take on a new city and see what I can make of myself and my surroundings. To push myself out of my comfort zone and build new things: work, relationships, community, space. I've never been one to do things “traditionally,” and I wonder what the future holds.

I'm looking forward to settling back down in a new place, cooking my own meals again and having a regular schedule. It's been an amazing 8 months traveling and exploring, but I'm definitely done with the living out of a suitcase, eating at restaurants, not having my own bed, and spending money that comes with traveling.

Pictures say a thousand words. Well, kind of. You might not know what some of these foods are without captions. And in these pictures, the main single word is YUM. 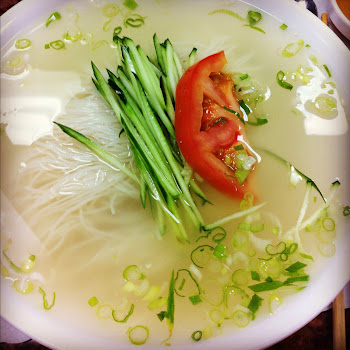 Korean cold noodle soup from Corner Place. I wish I had gotten a large!! This was delicious. 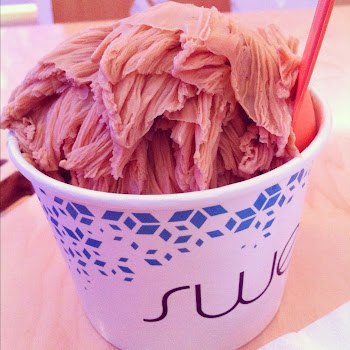 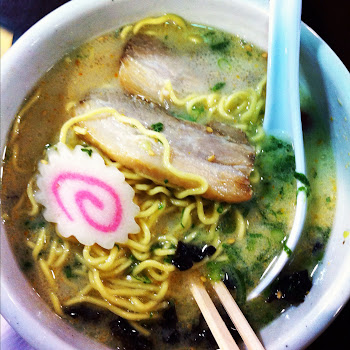 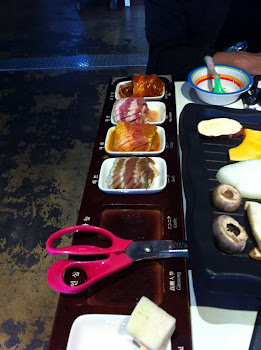 Eight preparations of pork belly laid out on a cool tray. Plain, curry, herbal, spicy, ginseng, miso, and garlic. Oh so good when grilled at the table. My favorites were the plain and spicy. 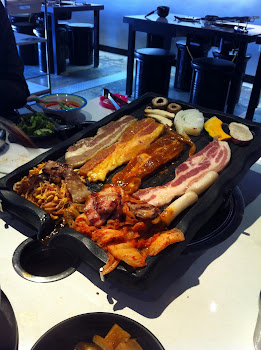 The grill is tilted down so the grease drips down through the kimchee and bean sprouts. If you want, at the end of the meal, they do a fried rice with the cooked vegetables. We were too full to eat that.

These were the best of the best, as filtered through my cousins' palates. But I am of the opinion that even bad food in LA is not as bad as bad food in Boston. Why is that? Is it that food in LA is just so much better or that food in Boston just is at a lower level? I mean, not all Boston food is bad, but when it comes to Asian food, especially Korean and Japanese food, Boston just doesn't compare to LA.

Thanks to my cousins for cramming all this food into our stomachs! I felt like those poor geese must feel, when being prepared for foie gras!

The world is both small and big at the same time.

Small in that we can travel to any part of it on a plane in, at most, two days.

Small in that we can talk to anyone anywhere anytime.

Small in that we can run into people we know in any part of the world coincidentally.

Big in that there’s so much to see that it’s really hard to see it all in one lifetime.

Big in that driving across the U.S. still takes a lot of time, in actual hours.

Big in that the sun takes awhile to cross the skies of all parts of the world.

I’m going to be seeing just a bit of that vastness in my travels.

And that’s as far as I’ve got planned right now.  I’m hoping to throw in a few more countries like Malaysia, Vietnam, Thailand, Cambodia, and Korea at the end.  I’m leaving soon.  September 3rd to be exact.  Excited and nervous.  Trying to finish my packing.  Last night could only sleep 4 hours.  The days are passing [too] quickly.

R is for “Resonance”

Lots of things have been resonating with me recently:

These are pictures I took on my walk yesterday on the Rose Kennedy Greenway, the result of the Big Dig where the highway was sent underground leaving above ground space for trees, grass, and a nice pathway in the urban jungle.

That mural was really eye-popping.  It’s on the area where the Occupy Boston encampment was located last year.  It’s interesting that this mural was put up (through the Institute of Contemporary Art) almost as a continuation of the spirit of Occupy Boston.

This past year I have been feeling a lot of resonance with everything around me.  Harmony.  Connected.  Antsy but at peace at the same time.  I was reminded of the concept of resonance structures from my college chemistry days when I was still pre-med!  Something about a stable form of a molecule or something like that.  What I take from that concept is the sense of stability, lowest potential energy where things are solid.  And even with so much changing around me, I feel grounded. I hope I can draw from that energy when things get hectic in my travels as I’m sure they will!

We went to the Esplanade Playspace with the niece and nephew and enjoyed the morning watching them use the kid zip line and other playground contraptions. Amazing how fancy these playgrounds get these days.n I remember in MY day, we were happy with a rickety swing set that had swings, a sliding board, and monkey bars! Kids these days…. (or should I say “companies making kids toys these days…”)

We walked around the area of the Esplanade as the July 4th festivities were being set up and I saw this cool monument, sculpture, statue of Arthur Fiedler.

Arthur Fielder was the conductor of the Boston Pops Orchestra. I was reading that he was sometimes criticized for “over-popularizing” music when he did things like edited a longer classical piece for the audience or did orchestral arrangements of pop music. That’s an interesting critique- probably from elitist audiences who wanted classical music to be considered a high art form for those educated and with money to pay for the expensive seats! What’s wrong with making things popular and accessible?