It was a cool, foggy morning in the city.  The route was a loop through Crissy Field that gave us views of Golden Gate bridge shrouded in fog.  There were probably a few hundred runners in this race sponsored by Women’s Health.

My main goal for this race was to finish and to keep running the whole way.  And I accomplished those goals!  There were times when I just wanted to walk, especially as I saw other runners doing the same.  But I quelled the voices in my head that were saying, things like,

I just kept thinking of how much I wanted to be able to tell people that I ran the whole race, all 6.2 miles, without stopping.  And just that thought kept me going.  The thought of how proud I would be with what I had accomplished.  But those “can’t” voices in my head sure kept trying to slow me down.

It’s all about willpower, which I’ve talked about before.  I know my body can do the run.  It’s not impossible physically.  But it’s all about the mind.  About those voices that say, “I can’t.”  And it’s amazing how loud those voices can be when the going gets tough: running long distance, difficult yoga poses, life challenges.

I don’t know if I’m ready for a half or full marathon yet in my life.  This 10K really pushed me beyond my comfort zone.  I still have the goal of doing a triathlon someday, so maybe that’s the next thing I need to start training for.

I like the challenge that these past 8 months of running have presented to me.  I had to get into a groove from never having one before.  I had to get out of bed and battle all the voices encouraging me to sleep and “just run tomorrow.”  I overcame a sprained ankle.  I made the decision to enter a 10K race before I had even run a 5K.  I started a job and had to figure out a new running schedule.  All of these potential roadblocks were overcome by my will and desire to keep going and reaching my goal.  It’s given me learnings that I can apply to my life as I encounter challenges that really count.

I’ve been cooking a lot in anticipation of starting a new job, which means I won’t have much time for cooking anymore.  Unfortunately, I haven’t taken a lot of pics because I’m increasingly feeling a bit foolish and self-conscious taking photos of food.  What happened to the simple joys of cooking, enjoying the process, and then eating with friends and family?  Well, then again, we weren’t blogging, Instagram-ing, Facebook-ing back in the day.  We’ve become such a visual culture.

But enough on that.  Here are some of my cooking adventures with links to recipes I used.

I’ve made this and posted about it before.  It’s always a wonderful feeling to make some kimchee, jar it up, and then wait a few days for it to ripen.  This time I think I didn’t use enough salt.  I shared some with friends (though I worry about that a bit because it wasn’t the best batch I’ve made).  Already, I’m waiting to make another batch.  But I’ll need to wait for another free day.

This was one of my cooking highlights.  I’ve been hunting for a good pizza dough recipe for years.  I’ve tried all kinds.  For awhile, I was using Giada De Laurentiis’s recipe, but one thing I always found lacking was a yeasty, springy texture.  It was more cracker than dough.  Good for thin crust, but not great.  I finally came up on this recipe.  Easy to make.  You just have to make it a few days in advance (or make it way in advance and freeze it).  But it’s so worth the wait.  Soooo good.  And so easy to make the pizzas once they’re ready.  Something about the slow-yeast-rise adds amazing flavor.  This is definitely going to be my go-to.  And I hope the next I make it, it’s just as good.

The other part of the amazing pizzas were the toppings I chose.  I was cooking for my cousin and his wife who are big foodies (especially my cousin).  So I knew I wanted to do something simple, classy, and super-tasty.  I bought all my groceries at my beloved Berkeley Bowl for under $30!  That included fancy mushrooms (including chanterelles), arugula, bacon, buffalo mozzarella…

I chose not to use a red sauce or any kind of sauce for the pizzas.  I feel that sauces tend to drown out the flavor of the dough and the toppings.  So here were my combos, in order of deliciousness (top listed first):

I didn’t take any photos, but trust me that each pizza was delicious!  I’ll be making this again for sure!

I don’t really use a recipe for this, I just throw things together and it usually turns out great. 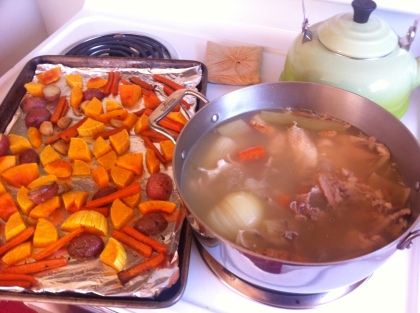 OK, that’s enough for this post.  I don’t want to overwhelm you!  And now I’m back to being a working girl.  And I’ll just be eating stuff like this (haha, no really, this was the simplest thing ever to make): 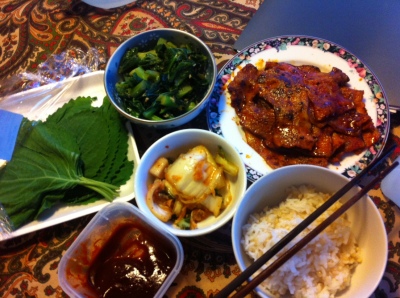