I'd been hearing about these so-called Pancake Rocks at Punakaiki that were highly touted as an amazing sight. I didn't really know what to expect, but I was looking forward to it. So when I saw them, WOW!

I came to Punakaiki on recommendation from the gardener at Seresin (thanks, S!) and originally planned on staying three nights, but after seeing how small Franz Josef was and thinking that Punakaiki was smaller, I decided to cut back to two nights so I could have more time in Nelson which was my next destination.

It was a pouring rainy day when I left Franz Josef for Punakaiki, but by the time we arrived, the rain had at least stopped. It was grey, but as the day went on (I arrived in the mid afternoon), the sun made an appearance for a bit.

The bus makes a stop in Punakaiki for all the bus-riders to see the famous Pancake Rocks, so I just joined the rest of them while waiting for my pick up to my hostel. 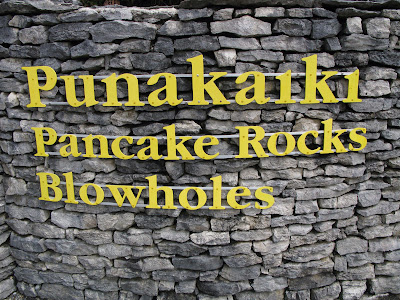 I love how many of the treks and natural sights kind of creep up on you here in New Zealand and then have a WOW-pop factor. There's an easy trail to get to the rocks, and as you turn a corner, you see the Tasman Sea and the first set of pancake rocks. It kind of takes your breath away because you haven't seen anything like it (at least in my case): 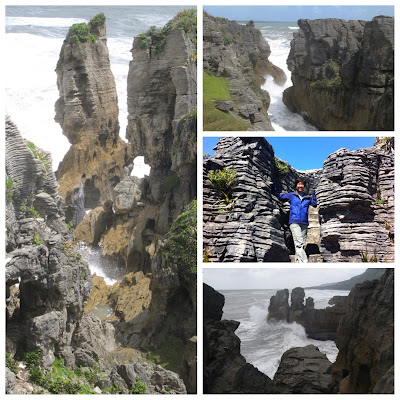 I'm a huge fan of the ocean and big waves anyways, so add on to that these amazing natural formations. I kind of whizzed through the trail on this first time around because I didn't want to be late for my pick up. But every bend and turn of this trail revealed more amazing-ness. I heard that it was cooler to see at high tide, which had passed a few hours before. But it was still amazing to see the waves pounding away at these formations, just cutting, cutting away at the rock. Water and wind are such amazing elements– so soft, rough, elusive, nature's agents, really.

I got picked up by one of the hostel owners, checked in, and got settled in this rainforest retreat: Te Nikau Retreat. It's a hostel tucked away in the rainforest (not a tropical rainforest like in South America, but the rainforest in New Zealand is really a lush forest of lots of native trees and plants. It rains a lot in the West Coast, and there is this a forest, so I guess put those together and you get New Zealand rainforests.). There are separate cottages, and I stayed in Rata Retreat, a dorm with a kitchen, common area, and a cool set up of mattresses on the top level. 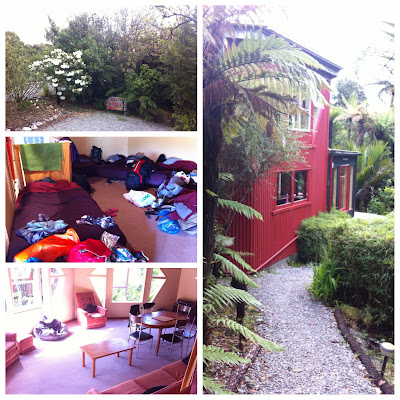 After getting settled, I headed out for a walk right away. I walked for about an hour and then realized I wasn't on the trek that I had hoped to be on, so I headed back to the trailhead. There were some nice views, but it was a bit boring. Then I went to a beach trail which was beautiful, near the hostel.

My hostel-mates were an Austrian woman (very energetic and totally sweet. We chatted about traveling and about both having quit our jobs to come travel.) and a group of Chinese tourists led by a guy who had just moved to Auckland and spoke English quite well. The three of us (the Austrian woman and the English-speaking Chinese guy) chatted quite a bit, and the other Chinese tourists were kind of in the background, but very nice. They offered us to eat with them! So cute. It's always nice to come across nice travelers along the way. Swapped travel tips and contact information for future visiting!

My second day in Punakaiki, I did a long hike (all together probably about 8 or 9 miles or more? I wish I had a pedometer to measure how many miles I'm walking!) with some nice views. 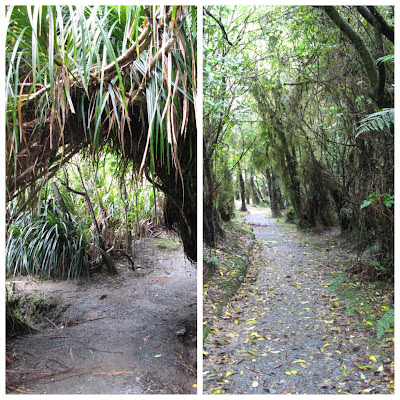 Then I went back to the pancake rocks and got to see the amazing-ness of high tide when the big waves come in through the rock formations which act as blowholes that spray water through the small holes. I totally got sprayed with sea water. It was incredibly windy and a bit chilly, otherwise, I would've spent hours just watching the spray and waves. 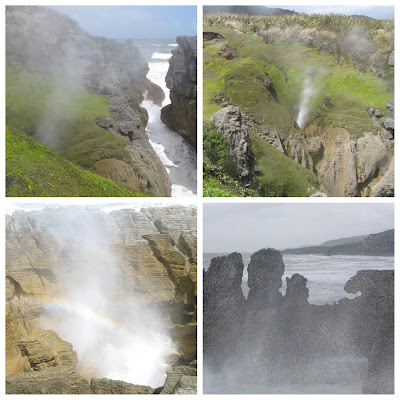 The sun, which had been hiding most of the morning, came out in the afternoon, and I just sat outside, watching the waves of the sea, soaking in the rays. As I think I've said before, I am so solar-powered it's not even funny. I perk up when I get some sun, and my outlook becomes even more positive than before. Happily I'm headed to Nelson which is supposedly one of the cities with the best weather in New Zealand. Hopefully it'll be nice!

I'm getting a bit tired of my hostel meals– hot porridge (muesli and water) for breakfast, cheese-hummus sandwich with an apple for lunch (and an occasional boiled egg), and some kind of curry with rice for dinner. I made a tomato-lentil-leek curry for my Punakaiki dinners. Still tasty (more choices of spices plus cooking oil at this hostel!!) but I'm getting tired of the same thing everyday. I'll hopefully treat myself to a nice dinner or lunch in Nelson. And I'm thinking of buying some bacon to cook for dinners! Miss my bacon!

That evening, there were some new backpackers in the hostel, and we were all a bunch of women– me and a bunch of European women. A few of us went down to see the sunset and I had my small bottle of seresin dessert wine, and the Austrian woman had a bottle of red, and we drank wine and watched the beatufiul sunset over the Tasman Sea. At one point, it hailed and rained, but then the sun came out again from behind the clouds! 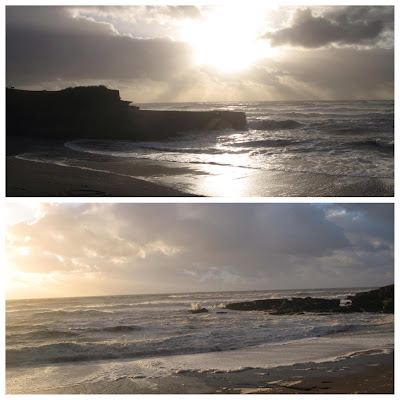 With our cottage being so small, it was easy to just make friends with the other backpackers, and we sat around and talked about life, culture, relationships… all sorts of things. It was a nice time to socialize and meet some new people. We even exchanged emails and Facebook usernames! It's amazing how much you open up and learn from travelers when you know you are just crossing paths for a day or two. I've met such kind and open hearted people.

The next (and final) day in Punakaiki, I hung out with my fellow travelers until they left, and then enjoyed a nice cup of coffee (called a long white– I think it's kind of a latte… didn't really understand the explanation). Yumm. I did a final turn of the Pancake Rocks (they're different all the time– depending on the tides, the wind, the sun, the weather…). And said goodbye to the beautiful coastal town of Punakaiki. 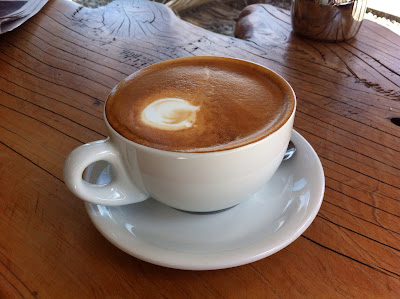 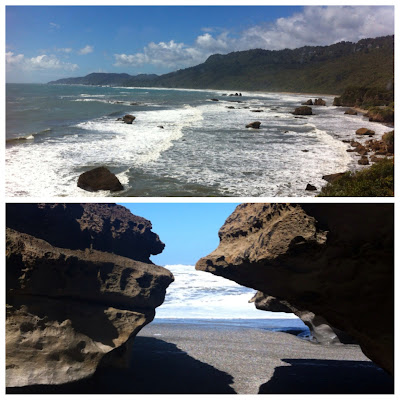